Following up on the previous post, I ended it with a data-dump so it’s only proper to spend a bit of time talking about what those figures actually mean… Here’s a roll-up table of the main findings looking at the biblical books specified by season in the Ordo XIII trajectory of the Daily Office that we encounter from the early eighth century through the eleventh century: 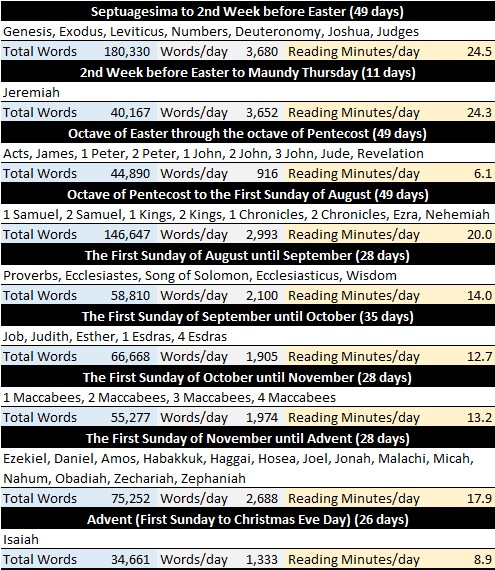 Yes, the word counts are anachronistic as this is reckoning NRSV words, not the Vulgate, but they wouldn’t be radically different. I’m allowing it for the sake of comparison later on…

What this chart depicts is if the listed readings were all apportioned equally, how long it would take to read through the material intended for each season.  This is unlikely to reflect reality because of several factors.

First, biblical readings were handled differently in different times and places within the Night Office. Usually they were read during the first nocturn which was usually the only nocturn on ferial days. On Sundays and other feast days, the biblical lesson occupied the first nocturn, the second, and third contain material pertaining to the feast. During the summer, not all monasteries had full readings during the first nocturn given the shorter length of the night. Alternatively, Ælfric praises his monks for maintaining a full three-lesson course during the summer (LME 80). If Matins were roughly the same amount of time each day—that is if the monks were roused at the same time of night—then more time could be devoted to biblical reading on the single nocturn ferias than on the feast days; roughly a third of the amount of in-course reading would occur on these days than the others.

Now—the object of this current series is to look at the contemporary two-year Daily Office lectionary, not the early medieval one. However, if one did have the time and inclination to try and figure out exactly how much time was devoted to these readings and to figure out an exact amount of how much of this biblical material could reasonably be read within the service and what would be relegated to the refectory, this is how you’d do it…

Ok, enough of that… Given the biblical coverage laid out in Ordo XIII, how much of the Bible is actually read in the Daily Office each year? The full OT is listed plus supplemental contents from the Apocrypha (or, the full OT as they thought of it…), but only 25.4% of the New Testament. The Gospels and the Pauline epistles including Hebrews are missing.  These would be the materials covered in Mass, ideally, but we’re not including that lectionary in this reckoning. So: