I hope everybody had a great Thanksgiving and a good start to Advent. I’ve got some posts in the works that are proceeding in fits and starts. Barring actual substance, then, here are some manuscript pictures!

Advent puts us in mind of the Second Coming and the judgement; suitably, here’s a rendition of the Last Judgement complete with the selected “sheep” at Christ’s right hand and the “goats” being led off by devils, all surmounted by Christ clearly displaying his five wounds from the Carrow Psalter (Walters, W.34 first discussed here):

The kalendar page for December is pretty typical for a thirteenth-century kalendar, but does have some items to remark on. Here’s the full page: Like most December kalendars, it’s rather spare since Advent was a penitential season. There are a couple of points to make on the feasts at the top of the page… 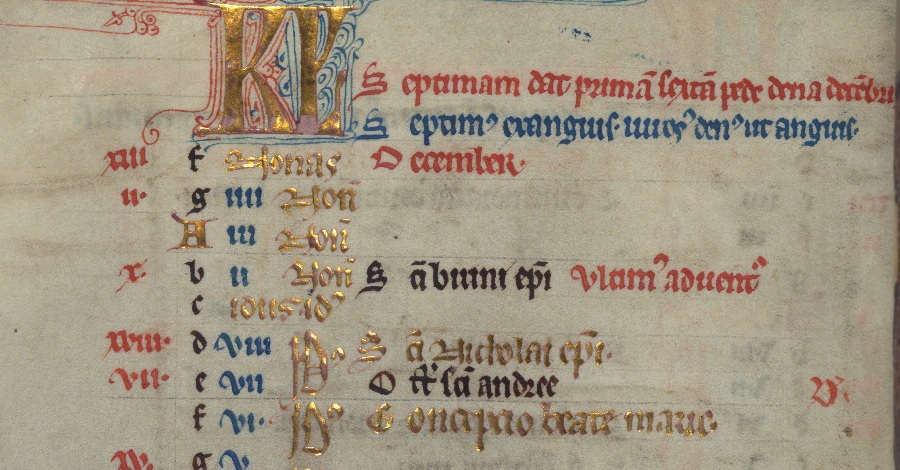 I’m at a loss concerning the bishop being celebrated on December 4th. I’d expect St. Osmund or St. Barabara here ordinarily; I’ll have to poke into this one a bit more… I was initially trying to read “Ambrose” here and we do have the “A”, an abbreviated m/n (that’s the line over top the “a”), and a likely “b”, but nothing else fits. And it’s on the wrong day. In any case, the note in red next to his name indicates that this is the last possible day for the first Sunday of Advent.

Nicholas and the Conception of the BVM get gold lettering; these are major feasts—I’d expect nine lessons and special propers. The Octave of St. Andrew falls between them.

A bit lower down, we see one of the liturgical entries that will survive into the first BCP: 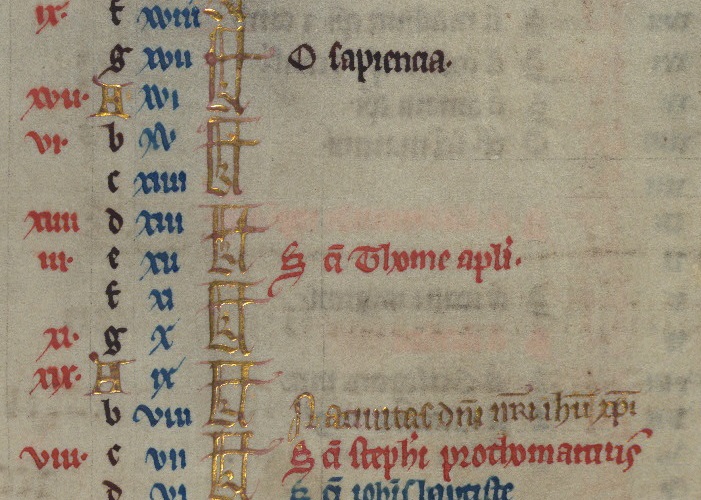 The entry on December 16th is the “O Sapientia” that signals the start of the O Antiphons. Again, note that the sequence begins on the 16th, not the 17th (the now standard Roman Catholic date) meaning that the Marian O Antiphon that we find in the Sarum tradition was likely included in the sequence used in this region. Of course, this makes me wonder how widely this usage was found. I should probably check some German, mid-French, and Italian souerces of similar date and compare…